There seems to be a cat theme in our house for Halloween this year. So that means lots of tails. Lucky for me, there’s only one new one to make this year – the rest are being dug out of the costume box. Like Purple Cat’s tail from last year. 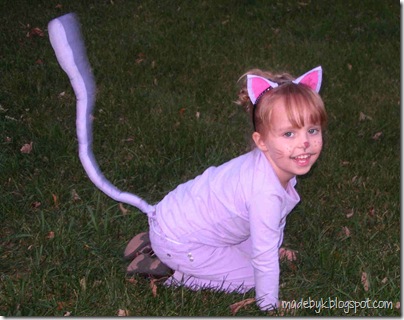 If you want to make your own non-droopy animal tail, here’s how:

You need a wire coat hanger, some stuffing, some fabric and other stuff like needle and thread, pliers, etc. A ribbon* and safety pin will come in handy for turning the tail right-side-out. (*Actually, I used bias tape ’cause that’s what was laying around. Anything long and stringy would do…) 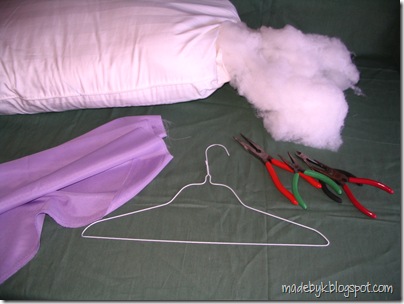 Straighten out the coat hanger, then form it into a loop that fits around the wearer’s waist. Bend a little hook into one end of the loop and a sharp corner at the other so the hook has something to… um, hook on to. (Where's a thesaurus when I need one?) In the photo, the tail portion is also bent into a nice tail shape; don’t do that yet; keep it nice and straight for now. Also, in the photo, the loop is a nice circle. In order to actually be worn comfortably by a human, it should be an oval. But you'd figure that out yourself as soon as your then-3-year-old says "Mommy, too tight!" 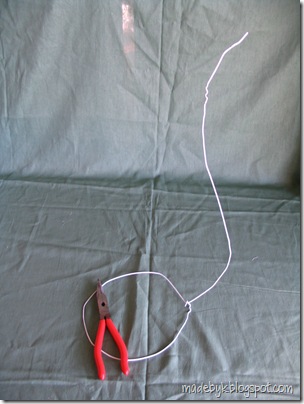 (For an adult’s tail, you’ll probably have to first twist two coat hangers together; most of one hanger will be used up for the loop…)

Pin the ribbon onto the right side of some fabric, near the edge. Make sure it’s longer than the tail. (You'll cut the fabric after it's sewn.)

Sometimes, I take all these pictures and then later, am not sure why. Does anyone really need to see what a safety-pinned ribbon end looks like?... Ooh, maybe I wanted to document that you need to keep a little space beyond the pin so you can sew around it? 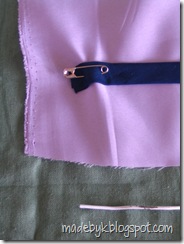 Next, fold the fabric up over the ribbon, right sides of the fabric together. Pin if you want. The ribbon should lay right along the fold.

Sew a tail-shaped seam, making sure not to catch the ribbon in the seam.

Again with the close-up…. And in the moments between inserting all the pictures then adding all the text so far and now, I forget why I thought this photo would be at all helpful... 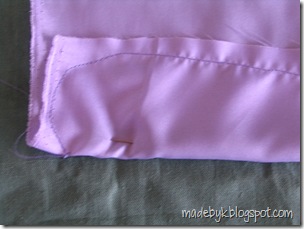 Next, cut around the seam. Remember that ribbon on the inside… (I didn’t want to cut mine.)

Turn the tail right side out. The wrinkles in the photo are in the wrong spot – I found it easier to start near the tip of the tail, pulling on the ribbon while I coaxed the fabric to turn in on itself…

Unpin the ribbon, then start stuffing the tail. And finish off by maneuvering the wire through the stuffing. See, that’s why I recommended it stay straight. 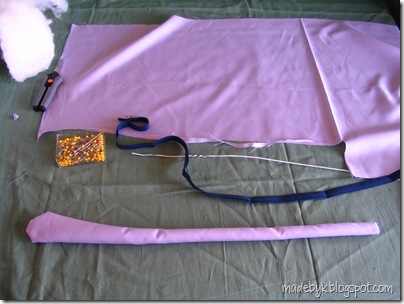 I didn’t do anything at the base of the tail to keep it attached near the loop, though some quick basting stitches to pull it tight (or even some well-placed tape) would’ve kept it from raveling unraveling** and wanting to ride up the tail a little or lose a bit of its stuffing. Actually, I just hooked the hook around it; that held it nice enough.

PUBLIC SERVICE ANNOUNCEMENT: This tail, while so cute and fun, is also very boingy and—depending on how you shape it—right at eye-level of any peers of the person wearing it. So if said person whips around quickly, they might take out an eye of said peers. That would make for one sad cat. 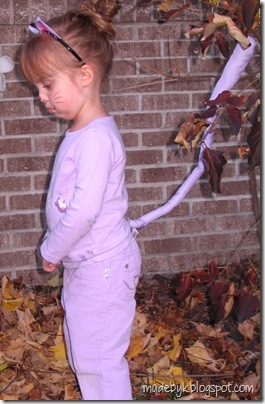 So, use at your own risk. Especially on costumes for preschoolers. Or boys.