How I Transferred Artwork to Cake

To make Lucy’s birthday cake, I first gave her a piece of paper that was the same size as the top of the cake, then let her fill it up with her artwork. But how to then get that design onto the cake? Here’s what I did…

NOTE: This method will only work on “crusting” buttercream, i.e. frosting that doesn’t stay soft. 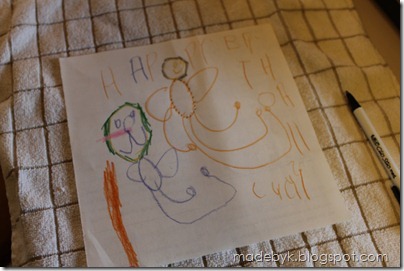 2) Poke holes into the paper, on the lines. I used a pen tip. A toothpick might work well too.

Now your paper has lots of little tear-outs on the backside, like reverse Braille. 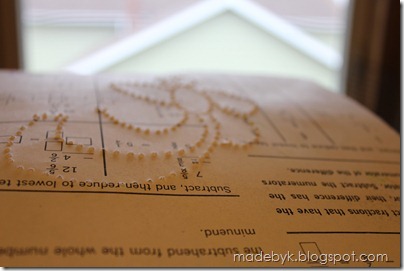 3) Lay the paper on the cake and gently press tear-outs into frosting. Ta da! Lots of dots to guide you! 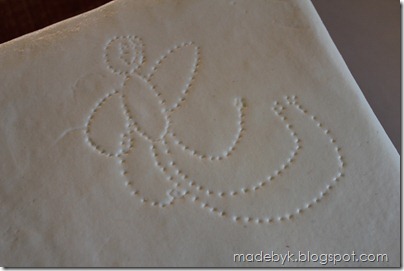 4) Pipe frosting over the dots. 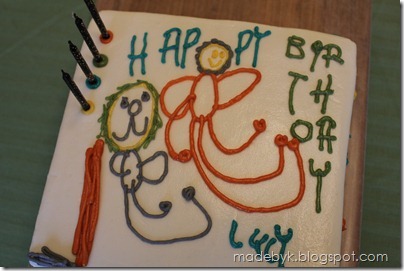 A few other thoughts:

I was trying this method for the first time and wasn’t sure how well it would work so didn’t want to waste my time doing the whole design right away. And if it did work, I was afraid all the dots from the whole design would be too confusing to follow. Hence, I started with just the “fairy.” 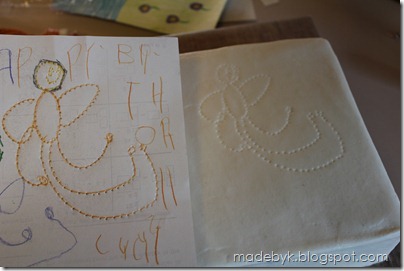 To do the rest of the image, since I knew I wouldn’t be able to perfectly line up the previous tear-outs with the dots already in the cake, I cut away smaller still-smooth sections from the paper, punched them, and pressed them into the cake one by one. (That also allowed me to pipe the dots that were there before adding more dots and confusing myself.)

Next time, I want to try just lightly tracing over the lines, again on something soft, instead of punching holes. Perhaps the indented lines would be enough to transfer the design. Would maybe be quicker and less confusing.

This might be great too for people who have trouble writing on cakes: write it on a piece of paper first—or even print it out! Then it’s just a matter of piping it accurately and neatly.  : )

Yesterday, my parents rolled out with my kids in the car with them. They’re headed west – grandparents and grandchildren on a Grand Roadtrip. And tucked next to each girl is storage clipboard, filled with a few goodies to make the miles fly by a little faster. 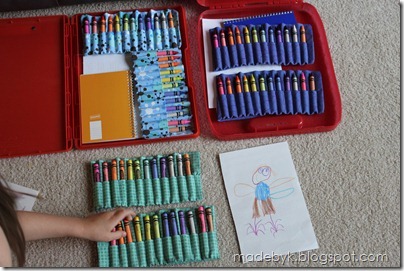 The crayon rolls were an afterthought. I haven’t sat and made anything in weeks—the last three posts all showed things made prior to the strange exchange. I’ve just been too busy.

But the night before they were leaving, I decided the 24 new crayons we put into each girl’s clipboard should not just bang around in there. And fall out when a girl opened it. And get lost and stepped on and ground into the van carpet and ruined and so on.

And I decided I needed to make something!

There are loads of cute crayon rolls all over the internet and I’m assuming there are loads of great tutorials for them too. But it was already late and I had very little time, so figured I’d just make it up as I went along.

I’m glad I remember, for a change, to not use my “good” fabric (the one Middle Child picked out for her rolls) right away. Instead I grabbed one that would be cute enough for Youngest, but not so precious that I’d mind scrapping parts that didn’t work out. Like the 5” I ended up cutting off the top because my idea for a flap to cover up the crayon tips was a really bad one! 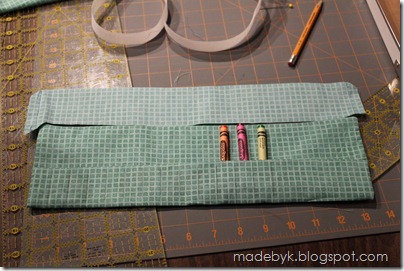 All the crayon rolls I’ve seen thus far use a ribbon tie to keep them shut, which I knew would be ridiculously useless in this case since two of my three children can’t tie a bow! Not wanting to fiddle with finding enough elastic at this last hour and then figuring out the best way for it to fit, I went the Hook-and-Loop-Tape route. (A.k.a. Velcro!)

My first attempt was just a plain rectangle, but I didn’t like how the corners flapped out when it was closed, so I made the next one tapered. 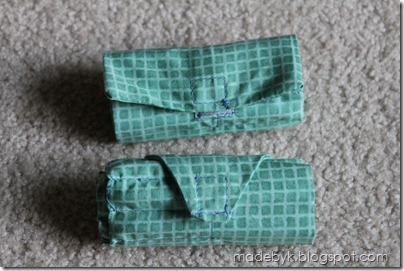 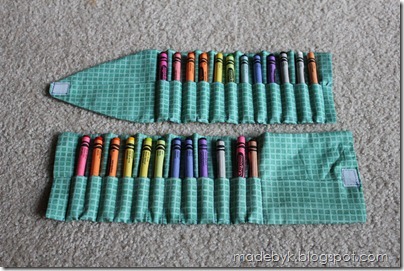 And speaking of Velcro, clearly I have some things to learn about attaching it so it actually keeps things closed. Exhibit A: 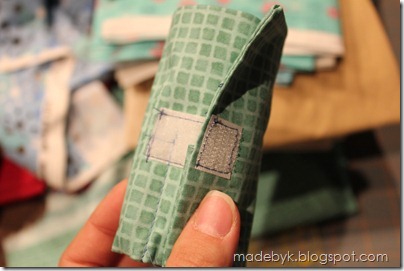 Exhibit B (in which I attempted to streamline my process and ended up causing even more problems – not only was my velcro wrong, I couldn’t even turn the roll completely right side out!): 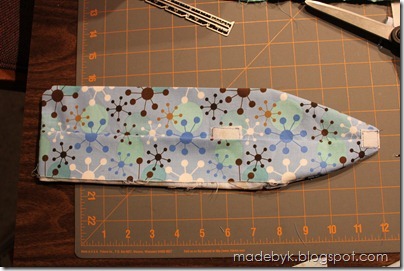 In the end, I made sets for Youngest and Middlest, whose clipboards are too slim to hold the crayon box, and a set for Oldest (in her favorite color), because by then, I knew what I was doing, and I knew my bit of extra time and effort would go far to make her feel included and loved. So here they are all rolled up… …and here they are all laid out. 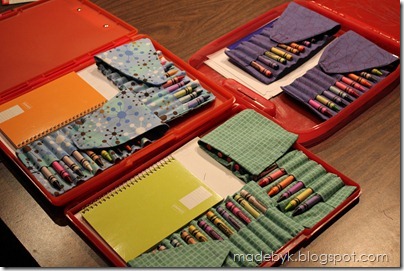 And enjoy your “kiddles,” Opa and Oma.

I LOVE Lucy’s drawings these days. They are just so… happy! But yowsers, is she prolific! At first I was carefully tucking them into her “keep” box. But then I realized I would soon run out of room. The girl just loves to draw.

So when I was thinking about what to put on her birthday cake, wanting something that would capture a piece of her life right now, I decided I should just let her design it herself! 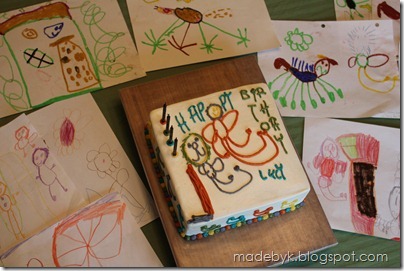 She drew a “throne” (see that backwards L?), a “fairy” (in orange) and a “flying lion.” At 4, she does not yet know how to spell, but she loves letters, so I wrote out a “HAPPY BIRTHDAY” cheat sheet so she knew which letter to write next. 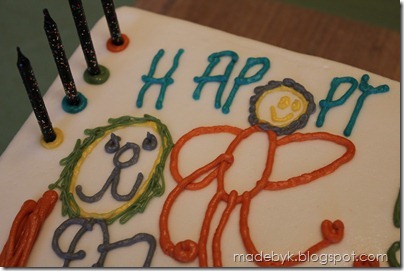 She doesn’t need a cheat sheet for her name – this version was a little more legible than usual though. Often, the four letters all end up looking like Cs, the last one with another tiny tilting C on top… 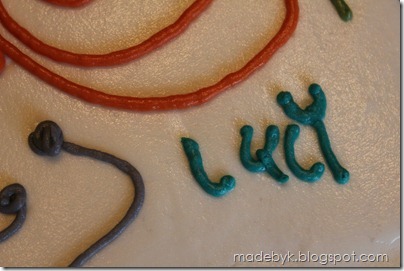 All limbs drawn by Lucy (whether people or animal, arms or legs) end with dots. And when the people/animals are flying, then the limbs extend off to the side, you know, trailing through the air after the body! They’re just too cute in these mama’s eyes! So that’s what I put all around the sides. Body-less limbs, flying through the air. 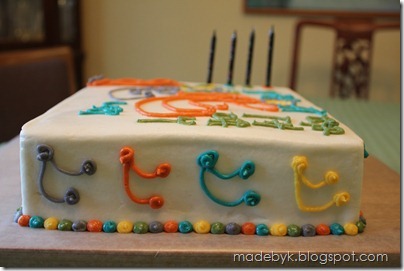 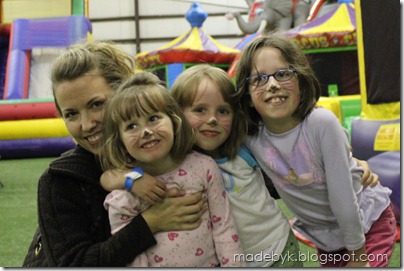 …it was finally time for cake. Happy Birthday, sweet Lucy! 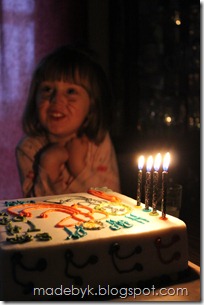 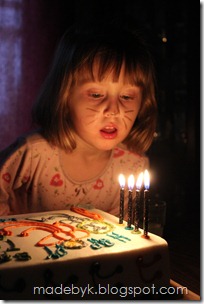