Since my cousin and her new husband have just celebrated their one-month anniversary this week, it’s probably time I post some cake pictures. Here’s one of their wedding cakes, very similar in structure to the one I made for a Marriage Retreat Weekend, except that I made the inserts wider. And since there were globes on every table (the groom is American, the bride is German), I decided to wrap the inserts with map paper. 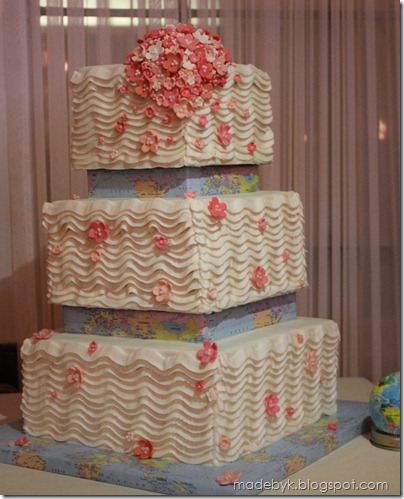 The flowers were very much inspired by a photo of a cake Jana found online. I made sure to save the source so I could credit it when I wrote the inevitable blog post, but now I can’t find it again. Ack! So here’s a close-up of MY flowers, instead. 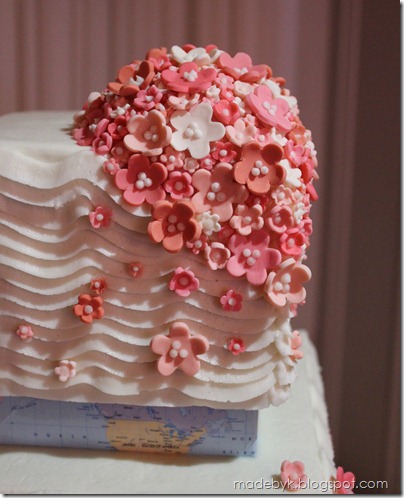 That’s a LOT of flowers. At the last minute, I called up some reinforcements – a few of the American Heritage Girls that I lead – and we had a grand time coloring and rolling and pressing and shaping. 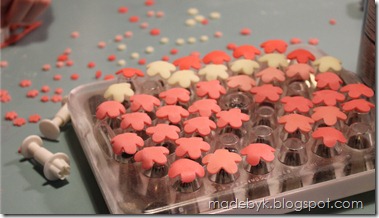 The other cake, sort of a “groom’s cake,” was a Schwarzwälder Kirschtorte, or Black Forest Cherry Cake, a Bavarian specialty. I’d never made one before, probably because I’d tried a piece once, when I was about nine, and hated the taste. But cherry liqueur and I get along much much better now; I could eat this cake all day every day! So yummy!!! 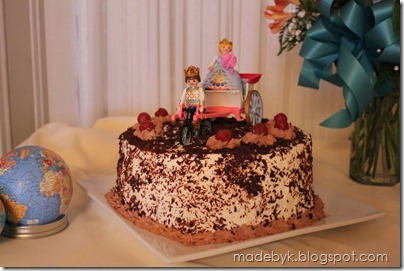 Ooh, I wish I would’ve gotten a picture of the inside. It’s three layers of cherry-liqueur-drenched chocolate cake, divided by layers of cocoa cream filling and this amazing cherry compote. Mmm, methinks I should make another soon. Ooh, I also thought I could earn “Best Mom Ever” points at my kids’ German Immersion charter school by making Black Forest Cherry Cupcakes and leaving them in the teachers’ lounge. A cherry-liqueur flavored cupcake with a cone shape cut out of the top and filled with the cherry compote, then the cone shoved back into place (or eaten by me), and then the whole thing covered with the whipped cream icing, sprinkled with dark chocolate shavings. Doesn’t that sound yummy?!?

Oh and the topper on the cake: When Paul and Jana were here and we were discussing the cake, Paul discovered there wouldn’t be a topper on the “real” cake, other than the flowers. So that’s where the idea came to do this other cake, and someone suggested that they use Playmobile figures instead of buying a generic couple topper. (Playmobile – the quintessential German toy.) I sent them up to the toy area, thinking they’d come down with our “sporty” figures, since both of them are into fitness. They did grab the bike, then hitched it to the carriage and added a prince and princess. Clearly, both of them are also into silliness! Just take a look at their fun engagement photos on Facebook!

And finally, seeing the Playmobile sitting around the kitchen for a few days, my oldest was inspired to make a little stop animation video as a wedding present for them. So that’s what I’ll end with:

(And anyone who’s been visiting this blog for a year or more: did you recognize the folded star made from music sheets?)