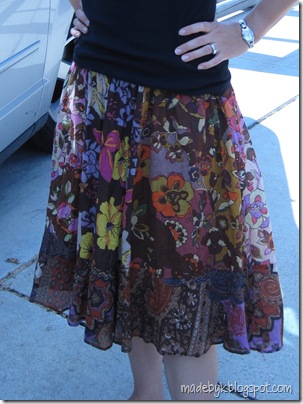 …and it started out life as a dress, one of those “babydoll” numbers that’s a little too impractical for my current stage of my life. 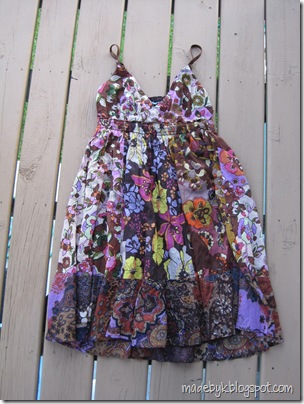 I can’t take credit for this transformation idea – my friend Mo was shopping, found a bunch of dresses on clearance for $5, figured they were too cute to pass up but too short and sassy for a busy mama to wear, and then had a light bulb moment. Chop the straps off and fix up the waist a bit if needed. (Purple dress not cut yet; one dress AWOL.) 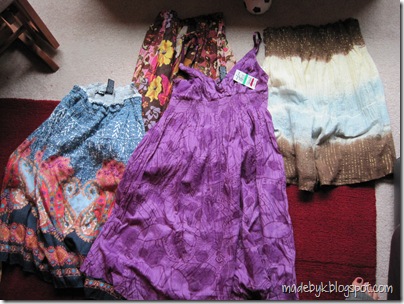 And being the good friend that she is, after showing me her windfall, she let me pick one out for myself. And let me have my favorite even though it was kinda her favorite too! And then insisted I not pay her…  but instead help her with the sewing on the ones she was keeping. : )

Here she is attaching her first waistband – we found a great striped fabric with all the right colors and even thin gold lines.… So pretty! 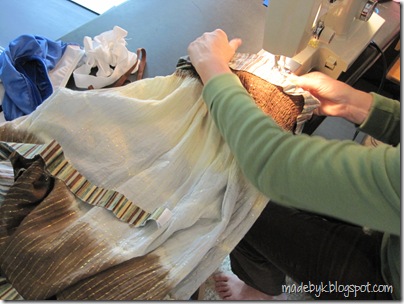 And alas, I was typing up directions, then realized half way through that I didn’t have photos of some of the next steps.

But that’s perfect since it gives you time to go browse your local clearance racks/thrift store/op shop/etc and find a cheap and fun but way too short shirred dress.

Picot Edging How To (and Comparisons)

I am a tester. I like to know things. And I like to be “right,” do things the “right” way, whenever possible.

So is it really any surprise that I recently crocheted four samples of picot edging, trying to find the “best” one? No, the only surprise is that I was able to stop after four; seems like every book and website out there does it differently! But I think I’ve settled on one I like….

First, let me back up a quick moment. Picots are those little loops or bumps that you sometimes see on the edge of ribbon, clothes, etc. And it’s a common edging on crocheted projects. 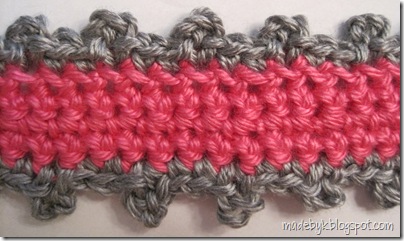 But it’s the way the chains connect to the rest of the piece that changes.

Behold, my comparison photos: (this is where some of you start to shake your head, saying, “Karin, they’re all the same!” Undaunted, I forge on.)

Is it just me or are the bottom two less symmetric, with the left side of the picots straight up-and-down and the right side at an angle? Plus the one at the very bottom has little holes near the bottom of each picot. Not what I’m looking for. So clearly, the top two are better.

Well, then let’s look at the back sides… I like that the grey stitches on top of the pink portion look nice and even on the first (and last) one; the middle two have these funny horizontal “dashes” under every picot.

So, clearly, version #1 is the winner in my book. (Version #2 is what I used on the scarf because I hadn’t found version #1 yet.) I’ve written the picot stitch as the photo caption. The pattern for a whole row would be:

The other trick, no matter which picot stitch you use, is to tug each little picot so it lays nice. Sure, if you made a blanket, that might be 264 little picots to tug, but I didn’t say I like to do things fast. I said I like to do them “right.”

Oh, and the final trick – after you’ve tugged all those tiny bumps – is to keep them laying nicely by blocking your finished piece. Here are some photos of the Hello Kitty scarf: top shows “pre-blocked” and bottom shows “post-blocked” . I should’ve lightened up a wee bit on the iron, but maybe you can see how the stitches in the bottom photo are all much flatter and sort of meshed together. That’ll help keep the picots looking neat, too.

Maybe another time I’ll tell you about baking three different batches of banana bread, all on the same day (I had lots of brown bananas), then asking everyone in the house to blindly taste them and pick their favorite…

But I think I’ll reserve the next post for my favorite new skirt. Or our new pet and his handmade habitat; he’s “singing” to me as I type this…

A project from a few weeks ago, for a sweet young girl on her fifth birthday: 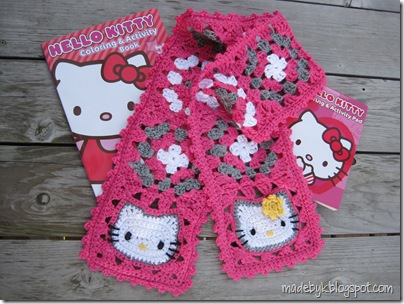 I’d seen the idea on Ravelry: a scarf (and a bag) made of granny squares and Hello Kitty squares. But when I tried the pattern for the HK part, I couldn’t get the face to look right, especially those ears.

So I tried my hand at making up my own pattern, using the photos I’d seen as a jumping off point. And I actually figured it out! (Though I lost track of how many times I started over and how many bound-off white faces got tossed in the reject pile.) 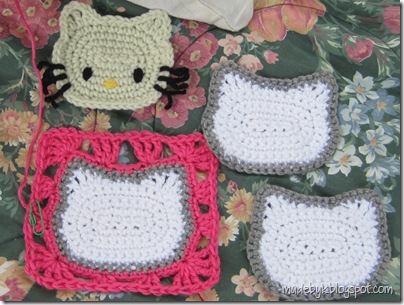 front “right” side with flower… and a face
that my perfectionism embroidered and ripped out
about twelve times before my rational side said
“It’s good enough already. Stop it!” 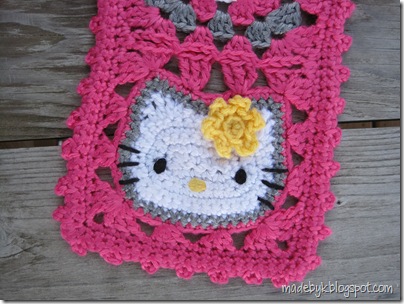 back “wrong” side without flower,
but with intact face which is one reason for the dozen do-overs –
I wanted BOTH sides to look nice… 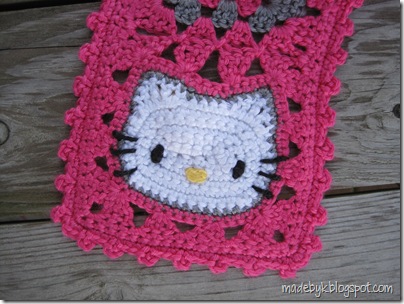 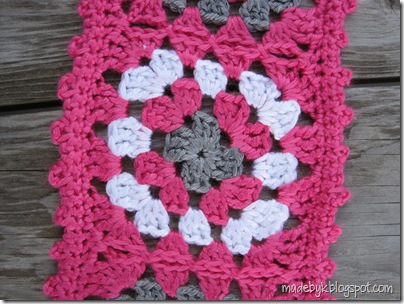 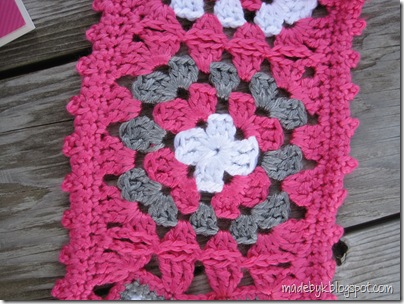 BTW: I loved joining the squares as I made them. Idea – and superb photo-illustrated instructions – came from attic24.typepad.com.

12/6/09: I’ve written up the pattern and posted it here. Warning: it’s really long – I’m not sure how best to shorten it. Brevity: not one of my strengths! But so many who’ve been requesting the pattern are fairly new to crocheting, so I wanted to include the kind of stuff I wish someone had told me when I was first learning… But seriously, it’s really long!

At the end of it is a link to a shorter, less information-packed but hopefully helpful pdf of the pattern.

Crumb Coating: “So THAT’S How They Do That!”

This is what the AHG cakes looked like before their second coat of frosting (and topcoat of fondant). 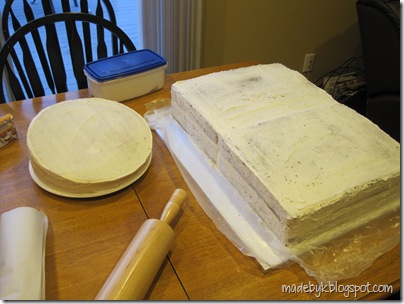 I thought I’d mention/show this in case you’ve ever tried decorating a cake and driven yourself crazy because crumbs kept showing up in the frosting. Do what the pros do: put on two coats of frosting.

Also, here are some great how-to videos about crumb coating:

And now you can say what my friend and fellow fondant layer said the other night when she learned all this info: “Oh! So that’s how they do it!” 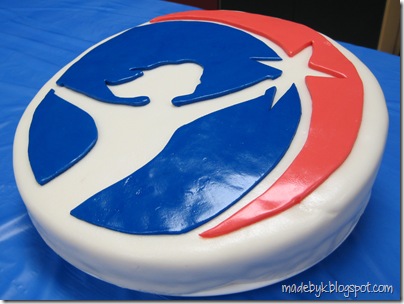 …and 64 girls plus their parents and leaders got to celebrate with cake at the end of our first official troop meeting this week. 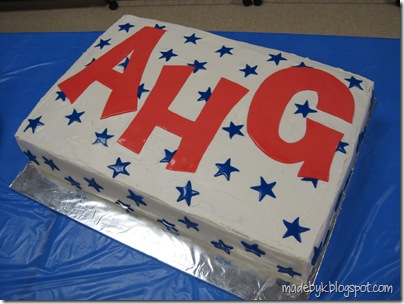 P.S. I did NOT make these behemoths all by myself. A friend did most of the baking, then she and another joined me for the decorating. Yippee! 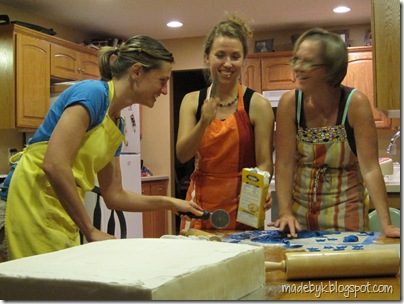 Man, I have new respect for all those sewing tutorial writers out there...

More than a month ago I said I would post photos of the making of the hankie hem T-shirt dress as well as tips for figuring out dimensions. 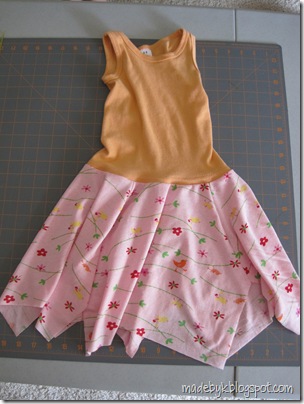 Since then I have posted about:

And then I abandoned the blog completely for two weeks.

…I think I’m embarrassed at the amount of inner math geek that emerged (gleefully) while figuring out the optimal dimensions for any size, shape and configuration. 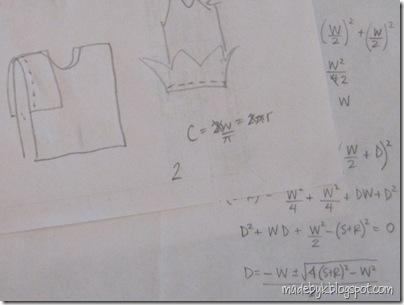 Yeah, that’s a quadratic equation in the photo above. And I used the Pythagorean theorem too. You know, a² + b²= c²? And then I put all that math into a spreadsheet (more glee!) to calculate the fabric dimensions based on T-shirt width and desired skirt length.

But unfortunately my brain and fingers refused to write out the steps that go with the dimensions. And the spreadsheet is not user-friendly in its current state. And the photos I took along the way show pieces that were way too long because I was guessing at the dimensions – no spreadsheet yet – and wanted to be sure I had enough length. (See below for what “enough length” resulted in before I chopped some off!) 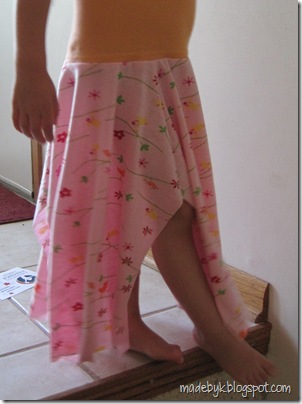 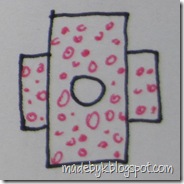 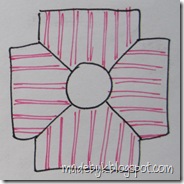 2) Find your T-shirt and your recipient and then email the following  measurements to me (see blog sidebar for current address, or you can also write the measurements in the comments if you’d rather):

(If you can’t measure the length on your recipient, send in her age and approximate height as well as T-shirt length from shoulder to bottom edge, and I’ll estimate dimensions for a skirt that skims her knees. Body part ratios change quite a bit as you get older thus age is needed….)

3) Give me a minute to pop the numbers into my spreadsheet, then a day or two to reply (unless I’m vacationing on an island with no internet access, not likely in the near future).

4) Use the dimensions I send back to you and the sketches below to figure out how big to cut your fabric pieces (and hole). 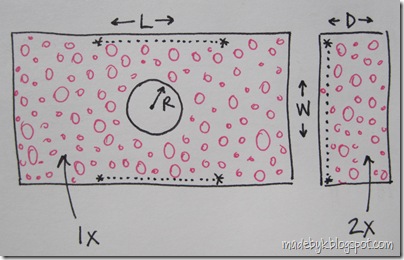 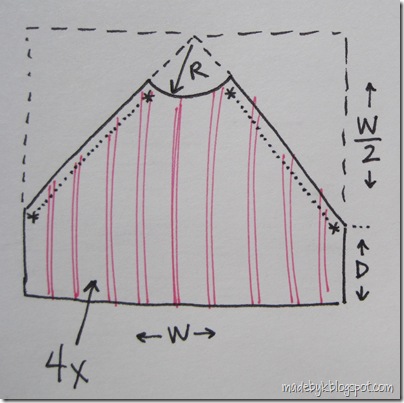 5) Sew up your hankie hem dress. 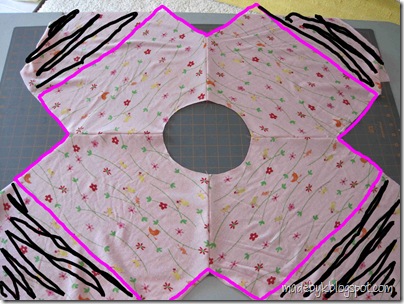 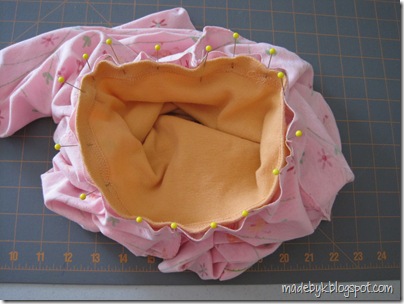 6) Email me if you need further clarification. Seriously, I’d love to elaborate, explain, or enlighten, but only if someone actually needs the info. : )  I know for some of you, this is enough…

And, if you don’t mind non-user-friendly spreadsheets and want a copy so you don’t have to rely on me, email me and I’ll send it out to you. Maybe I’ll even color-code and format it a little. (Sometimes I can’t help myself.)