Middle Daughter was home from school with me yesterday, both of us trying to recuperate from colds. After posting about Kenny’s cake, I HAD to also get rid of the pink blog background. Apparently, two years ago I liked it. But no more. Yech!

So I went back to bgpatterns.com, my go-to website for years to make my own background images, and boy was I in for a surprise. The creator has totally revamped it. Right around this time, Sophie joined me to eat her lunch. And watched me. And then saved me. 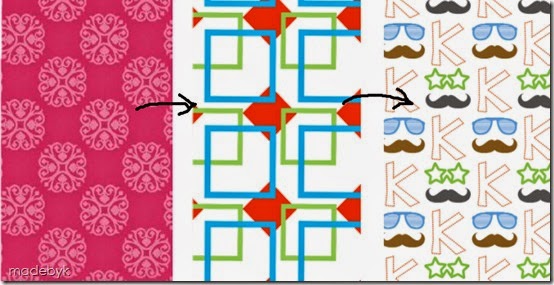 On the left is the original background. In the middle was what I was contemplating putting up. (I blame my momentary lapse of judgment on too much medicine cake.) On the right is what my soon-to-be 10-year-old daughter came up with.

I did have to help her make a custom image for the K since the website doesn’t include any letters, but the rest was all her. A little kooky, but for now, I love it!

Oh, and my only beef with the new bgpatterns site is that I couldn’t find a way to make the overall final image smaller. So we had to do that with another app.

But other than that, it was a lot of fun. Need a seamless background image, with your own custom colors and shapes? Try it out: bgpatterns.com

Haven’t been feeling well the past few days. So sat on the sidelines with a box of tissues and wrapped in a blanket while the rest of the family ice-skated yesterday. (I would’ve probably been better off in bed, but didn’t want to miss out of the family fun completely.)

At home again, Ken noted that the Dayquil I’d taken had done nothing to help ease my symptoms. Neither had the free-range organic chicken stock that he used to make that day’s soup. So he made something that he felt SURE would help me. Chocolate cake. With chocolate frosting. : )

I took two doses last night and have had another today. They’re at least as beneficial as the DayQuil, if not better.

And all that as a silly introduction to recap the birthday cake I made quite a while ago for the man who makes me cake when I’m sick. : ) And who enjoyed the Lego Movie, which had just come out around the same time. 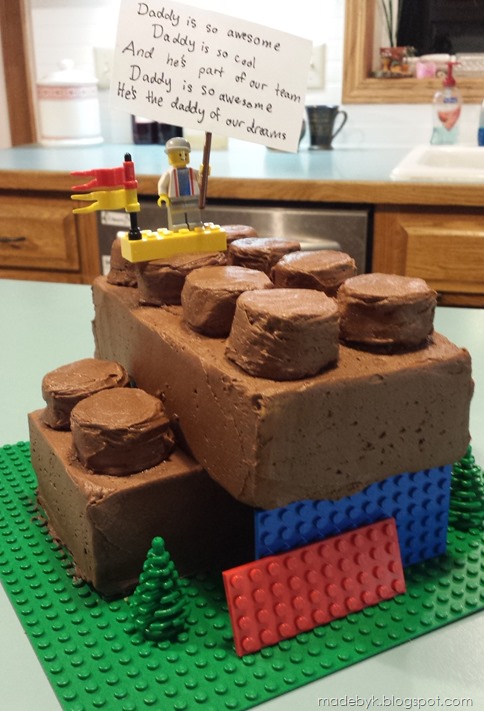 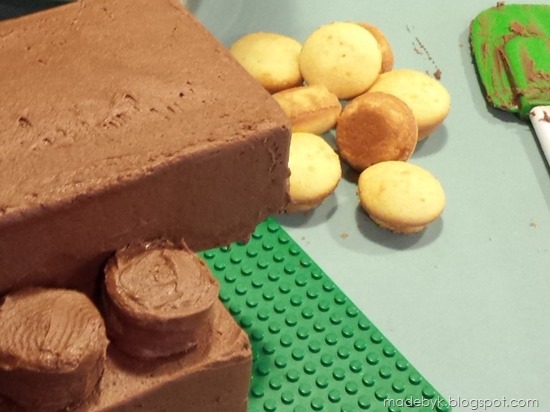 I cut square in half, then put one of the resulting rectangles on a piece of cardboard cut to the same size. Also made some supports out of cereal boxes, to help hold up the overhanging sections of the top brick. You can just see the in the picture below. Simply a rectangle piece folded in half. (Note: I put the bottom cake on the green baseplate and frosted it. Then put the second cake on top and frosted it.) 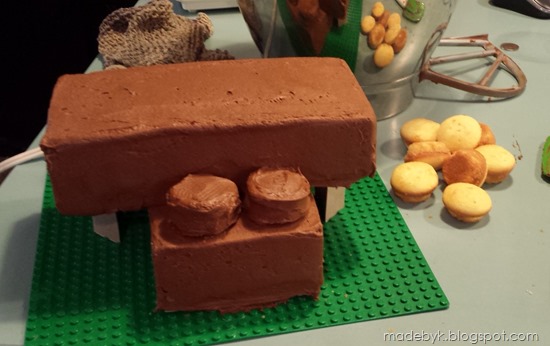 To frost the studs without pulling my hair out, I skewered the top of the mini-cupcake with a fork and slathered frosting onto the sides. Since the sides sloped inward top to bottom, I put more frosting at the bottom than the top to make them appear straight up and down. I also tried to build up extra frosting at the top edge so the last step would be easier, then used the fork to position the stud onto the block.

Then I pressed down on the unfrosted top so I could pull the fork out. And finally I carefully frosted the top of the stud. If there was enough of a build-up of frosting around the top of the sides, then it was almost more like just filling in the hole in the middle, which made the studs look less domed and more like they had a flat circular top. 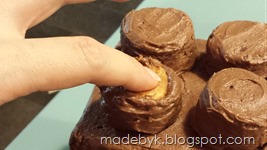 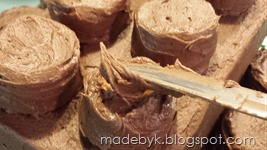 We added a few other Lego blocks, including some plates to cover up the cereal-box supports and a happy minifig to hold the sign one of the girls wrote. 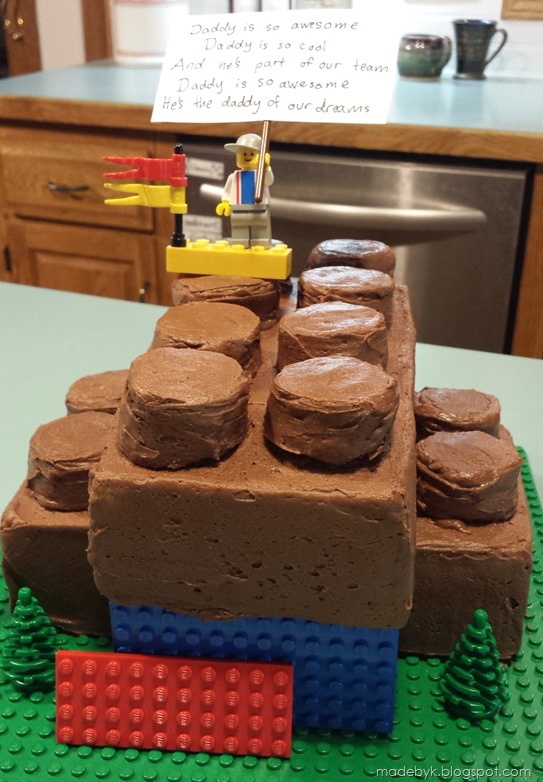 And with that, I think it’s time for my next dose of my medicine cake. Yes, that’s what my girls are calling it. As in “Mama, can I have another piece of your medicine cake?” 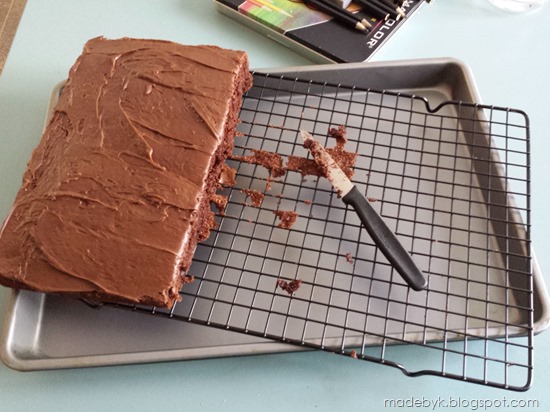 Oh, and when I saw it cooling on the counter, at first I couldn’t figure out why it looked so squat. And large. “Oh, you baked it in a jelly roll pan,” I said. His reply: “I did what? That’s not the usual cake pan?” Oh how I love that man. 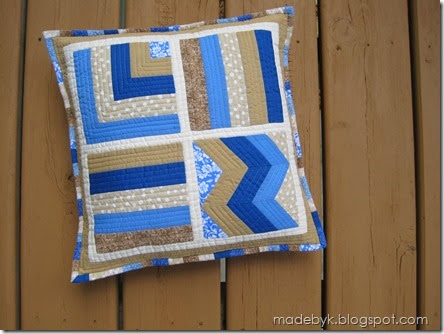 Then when I won some lovely felt food during a giveaway on her blog and she asked for my mailing address, we realized we lived only an hour from each other and soon became friends in real life. 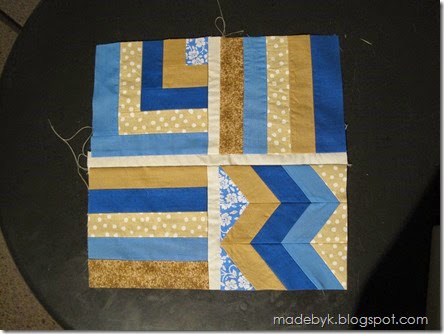 During one visit, I was surprised to hear that while she loved to sew, she’d never tried quilting and didn’t think she’d be any good at it. (Yeah, right!) On my drive home, an gift idea for her popped into my head… 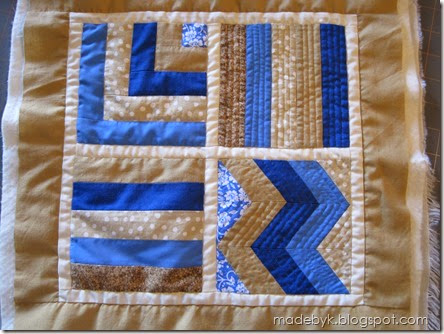 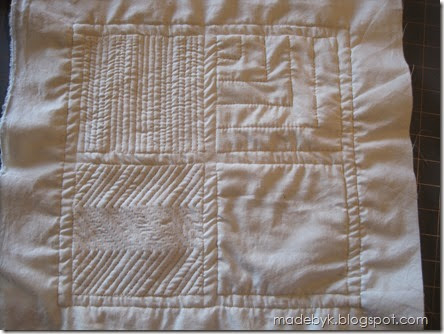 I cut lots of strips, tried not to obsess too much over which to put next to which, sewed them into blocks, and then machine-quilted each strip with parallel lines. 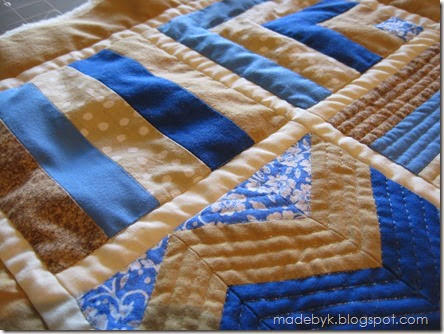 The top left block was like a quarter of a log cabin pattern. Could make a person think of the letter L. 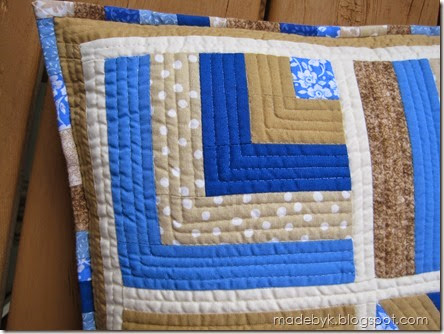 The top right block was just simple vertical lines. Kinda like a capital I. 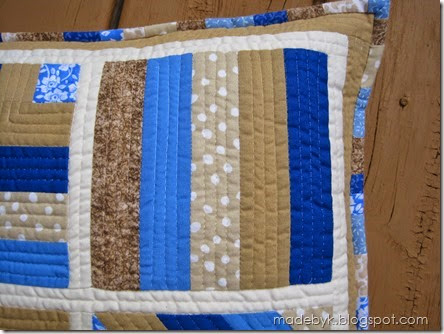 The bottom left was similar, just horizontal stripes this time. Reminiscent of the sideways strokes of an E. 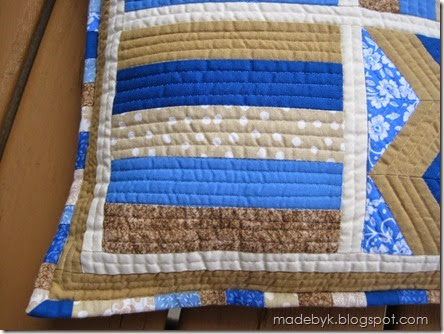 And the bottom right was a shallow zig-zag. Sort of like the right part of an R. 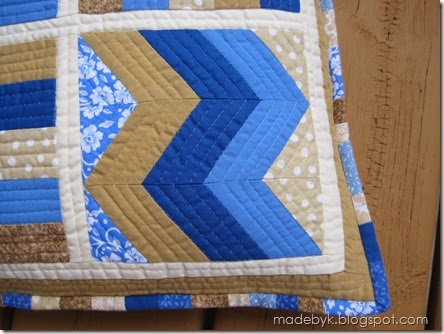 And what’s that spell?!? My friend’s Chinese name. 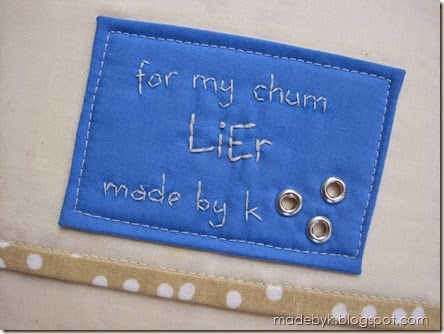 I was SO pleased with how it had turned out. Everything about the pillow made me happy, but especially the graphic “hidden” letters. I sent it off, not even knowing it would arrive just days before my friend’s birthday. 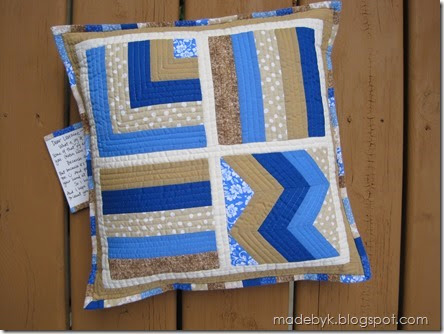 When she told me how much she liked it, I did ask her not to post about it on her blog. I wasn’t ready for the world to see it. On the one hand, I was afraid that people would see it and love it and make their own versions and there would suddenly be “graphic hidden letter blocks” all over the interwebs. I wasn’t ready to lose my idea yet. I hadn’t ever seen anything like it. And it was still mine. 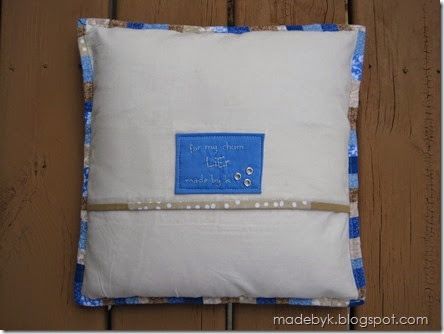 But on the other hand, I was also afraid that people would see it and be indifferent and no one would make their own version. No one would embrace it. No one would take my idea, the one I was so in love with, and run with it. It would die in obscurity. –sniffle sniffle– 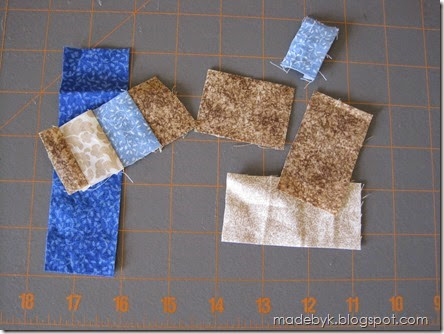 So I kept it hush hush and played with the idea some more. Designed a whole alphabet of “hidden letter” blocks. Designed a quilt top for another friend with her last name and the name of every member of her family, even the dog, hidden in it crossword style. But then other ideas emerged, other projects were created, and eventually that little idea of mine – and its associated sketches – was relegated to some backup hard drive somewhere in my house, two laptops ago. 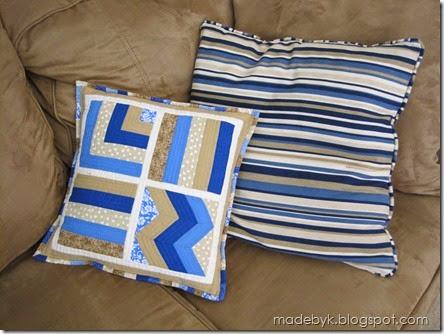 These days, I see the pillow on my friend’s couch when I stop by for a visit. And I know it makes her smile. And that makes me smile. 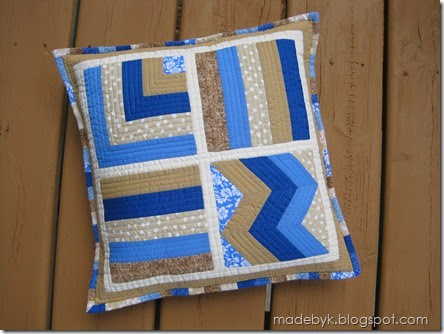 And now, with this post, my guarded, beloved idea is out in the open. Now, it can flutter off into the great wide world to seek its fortune. And I’m OK with that.