How perfect is this:

I’m sitting around, wondering what I’m going to make a Rapunzel dress out of, not wanting to buy anything (because I’m cheap and I hate errands) but not having anything suitable in my stash.

My friend stops by, says “I need to get more suitable curtains for the sliding door in our kitchen; do you want my old ones?” and then pulls out yards and yards of a creamy, floaty, shimmery fabric. Yes!

So here is Rapunzel in her not-covered-by-a-tower dress. Or, because I wasn’t about to mess around making a bodice, in her already-had-it-in-the-closet shirt with a little puff sleeve added on, and a big puffy skirt made of my friend’s old curtains plus odds and ends.

The skirt – a full circle skirt – was very twirly. And very swishy too, thanks to the big puffy crinoline I cut off of the lining of my oldest’s flower girl dress to reuse here. 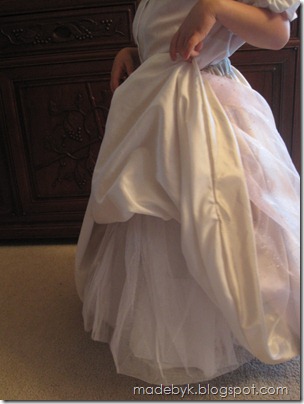 But the skirt was also very plain. Sophie wanted “that stuff that hangs down over the skirt” (explained while making large hand motions from her waist downward and outward). Lucky for her, I had a rectangle of pink sparkly fabric. And lucky for me, who has NO idea how to make a proper overskirt, my basting, gathering, sewing, and safety-pinning in place (see diagram below) worked well enough. 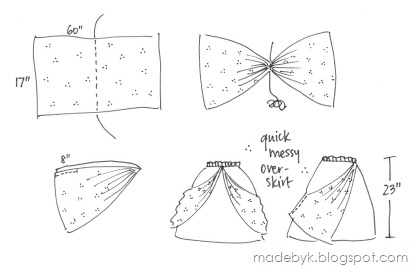 (The dashed lines are basting/sewing lines. The dimensions are only
included so you can get an idea of how large the rectangle was
compared to the skirt, in case you want to try this for yourself.)

The rosette at the waist was made from the leftover circle cut out of the middle of the skirt piece. I guess I was in a drawing mood today: 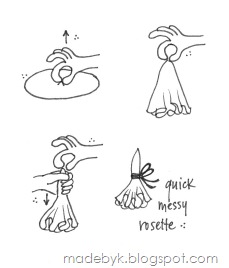 Then some ribbon at the waist (to cover bottom part of the rosette), some more at the end of the braid, and a bit more as a choker, and Rapunzel was ready (shown here during her Kindergarten Costume Parade, winding through every classroom of her school so the “big kids” could see all the costumes). 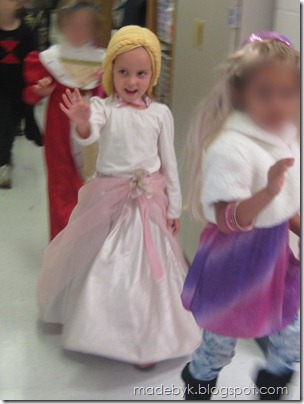 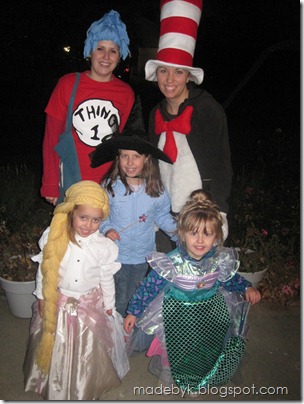 A little too late, I thought how cute it would’ve been to make some coordinating candy collectors, like what Pottery Barn often does. Rapunzel could have had a bucket decorated to look like a tower. The  Witch/Evil Hag Who Locked Rapunzel Up In The Tower could have had something resembling a head of lettuce (which is what Rapunzel’s dad stole from the Hag, resulting in Rapunzel’s incarceration). And the Mermaid – a fish perhaps? Or open clamshell?

Maybe next year… if the costumes are done earlier than two minutes before walking out to trick-or-treat.